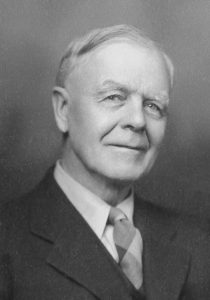 William Garner Sutherland DO (1873-1954) graduated from the American School of Osteopathy (ASO) in 1900. As a student of Dr. Andrew Still, he took the admonition to “keep digging” very seriously. As a senior student at ASO, Dr. Sutherland happened upon a disarticulated skull in the North Hall, noting the beveled artiulcatons of the spheno-squamous suture. He had an inspiration that the bony cranium was capable of respiratory motion.

“Beveled… like the gills of a fish… indicating articular mobility… for a respiratory mechanism.”

This “guiding thought” was initially quite confusing, but Dr. Sutherland could not let the idea go. Throughout his years of practice, with diligent research and study, he gradually developed a revolutionary expansion of the osteopathic concept.

Dr. Sutherland’s first public announcement of his new cranial ideas were presented in September 1929, before a district meeting of the Minnesota Osteopathic Association, in a paper titled “Bedside Technique” by Blunt Bones Bill.

Dr. Sutherland called his discovery “Osteopathy In The Cranial Field” (OCF), implying that he did not create anything new. He had simply applied osteopathic thinking and principles to the cranium.

With experience, research, and a deepening of his understanding Dr. Sutherlands concept of the cranial mechanism matured. At the core of this new understanding lies the concept of PRIMARY RESPIRATION.

The definition of the Primary Respiratory Mechanism (PRM):

1. Primary: it is a system that comes “first.” It underlies all of life’s processes and gives dynamism, form, and substance to all of anatomy and physiology.

2. Respiratory: It is the spark that gives rise to the breath, as it moves through the tissues. It is the foundation of metabolism. It has both an inhalation and exhalation phase.

3. Mechanism: It is a system composed of many parts that work together to create a whole, greater than the sum of the parts.

The beauty of Primary Respiration is the ability to experience it directly. It is not simply a sublime concept. In the hands of a skilled practitioner, one connects directly with Primary Respiration to bring about a therapeutic response. It is the guiding principle; it is the inherent intelligence within.

The Primary Respiratory Mechanism has classically been described as consisting of fIve components. These phenomena are expressions of involuntary physicologic motion within the central nervous system and it’s adjacent anatomy.

Each component of the Primary Respiratory Mechanism, however, exists only in its relationship to the function of the whole. In truth, Primary Respiration expresses itself through all of the body, and the whole of nature. It might be said that this intrinsic motion is a fundamental expresion of life itself. Like most naturally occurring phenomenon, it is only the human mind that reduces the pieces for observation and study.

Each phenonemon is briefly described below:

The Inherent Motility of the Brain and Spinal Chord

The Fluctuation of the Cerebro-Spinal Fluid (CSF)

It is well established that the cerebro-spinal fluid (surrounding the brain and spinal chord and filling the ventricles) fluctuates rhythmically. This rhythmic fluctuation can be visually observed (and pressure changes measured) during a typical spinal tap, and has been documented by numerous research studies.

A controversial idea unique to Osteopathy describes CSF movement throughout the body, passing along the spinal nerve sheaths and through extra-cranial lymphatics. Though initially controversial, this component of the osteopathic concept is now being strongly supported by recent neuro-science research.

The CSF is considered to play a very potent nutritive role for all the tissues of the body. In his later years, Dr. Sutherland was so impressed with the potency of CSF, he would refer to it as “Liquid Light.”

The Dynamic Shifting of Tensions in the Dura Mater 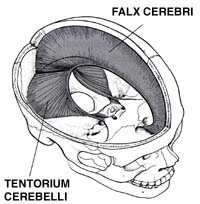 The Meninges are the membranes that surround the brain and spinal chord, and contain the cerebro-spinal fluid. The Dura Mater is the toughest and most outer layer of the meninges. The Dura Mater also has an internal architecture comprised of 3 sickles.One runs back to front (called the falx cerebri) and separates the two cerebral hemispheres. There are two other sickles, one on each side of the falx (called the tentorium cerebelli) that also run from the back to the front, somewhat parallel to the floor (when you are standing straight). The tentorium cerebelli gets its name from being “tent” shaped. The dura covering the outside of the brain then attaches firmly to the foramen magnum and upper cervical vertebrae, surrounds the spinal cord and descends to attach to the sacrum at the 2nd sacral segment.

These dural membranes are under constant tension. They are taut. Because of the tension through them, we refer to the Dura Mater as a Reciprocal Tension Membrane (RTM). If you pull on one end of the membrane, that pull is transmitted throughout. The Dura maintains the structural integrity of the bony cranium (as it attaches into the bones). Movement of the brain, and CSF becomes translated into the membranes as a dynamic shifting of the reciprocal tension.

So when the head is traumatized, the dural membranes may become twisted and compressed. The fulcrum around which the rhythmic movement is organized… becomes deranged. Often these membranes are the primary seat of the cranial dysfunction, actively distorting the bones they support.

The Articular Mobility of the Cranial Bones.

There are 22 bones in the cranium (not including the mandible or ossicles of the ear). They meet at the suture lines. These bones form in membrane and cartilage. At birth the bones are not fully formed and are in fact quite far apart from one another. As the infant is squeezed through the birth canal, the bones slide over one another and re-expand afterwards to resume their normal positions. This physiologic compressibility allows for maximum brain capacity and minimizes brain damage. All during fetal development and after birth, the brain is constantly undulating and CSF is constantly fluctuating. This movement is transmitted through the membranes out to the bones. As the bones gradually grow to approximate one another they remain in constant motion. This movement keeps the sutures patent (open). The sutures contain blood vessels, nerve fibers, and connective tissue, just like any joint. The amount of movement is very tiny, 100ths of an inch.

This movement of the cranial bones is considered controversial. Conventional thinking considers the skull to be fused. The concept of a fused skull is erroneous, dating back to a paper written in 1873, known as “The Monro-Kellie Doctrine.” The research supporting this doctrine is over 100 years old and was not very precise. More recent research supports our clinical observations of cranial bone mobility. Gradually, the mobility of the cranial bones is becoming a more widely accepted concept.

It has been found in some anatomic specimens that certain cranial sutures have fused. When fusion occurs, however, it is a pathological condition. Sutural fusion occurs because the cranium has received an impact causing the bones to compress, and lose their sutural mobility. When any joint in the body becomes immobile, it will fuse. (Put your arm in a sling, and after some time you’ll lose motion in your shoulder). In health, the Cranial Sutures are patent and allow for a slight amount of motion.

Another wrinkle… We consider the bones themselves to actually be a very dense fluid. They are living tissue. They are constantly being reabsorbed and recreated. They have inherent flexibilty. Traumatic influences not only compress bones together, but cause them to “stiffen” and lose their fluid nature.

The Respiratory Motion of the Sacrum Between the Illia

The sacrum is connected to the cranium via the dural membranes that surround the spinal chord. The dura between the occiput and sacrum is referred to as “the core link.” Attached only at the base of the skull and the sacrum at the 2nd sacral segment, the motion of the occiput is transmitted freely to the sacrum. The relationship of the sacrum with the occiput becomes clinically relevant when the cause of headaches may be due to a fall on the tailbone many years previously.

A skilled Osteopath is able to perceive and work with any part of this physiologic mechanism. As incredible as this may seem, we feel the bones move, the membranes pull, the fluids fluctuate, and even the brain undulate. During treatment each Osteopath may find their focus to settle upon a different aspect of this PRM. Some Osteopaths naturally engage or are more comfortable with the bones, some with membranes, some with fluid.

As I sit with my hands upon the patient, I learn how trauma has established itself in the whole person. Then as needed, I move into bone, membrane, fluid, or potency…